“Bonal was not immune to the year-long pandemic impact of lockdowns and economic regression,” said Thomas E. Hebel, Chairman.  “Despite a challenging year, Bonal implemented many cost-saving initiatives and several digital advances.  Together these efforts generated a profit, the second highest net income in the last five fiscal years. Bonal’s state-of-the-art system, Model 2800, dominated sales accounting for 53% of sales based on volume, up from 22% last fiscal year.  Orders from current customers and customer referrals were strong again accounting for more than half (56%) of sales by volume.  During the year, Bonal also improved its financial position, retained all of its employees, and did not go into debt.   Considering the strength of our state-of-the-art equipment sales, implementing several digital advances and the metalworking industry returning to normal operations, fiscal year 2022 looks to be an exciting year.”

May 27 2021
Bonal International, Inc. (OTC: BONL) has announced a dividend of $0.05 per share. This dividend marks the twenty-fourth time Bonal has issued dividends over the last seventeen fiscal years. The dividend is payable on June 18, 2021 to the shareholders of record as of the close of business on June 10, 2021.
Read More...

April 15 2021
Imagine a welder completes one side of a large workpiece, then flips the thing over and welds the other side, then flips it back to continue welding. A nonwelder looking on might think the welder’s just creating work for himself. But he...
Read More...

August 11, 2020
Royal Oak, Mich., Bonal International, Inc. (OTC: BONL) announced a loss for the fiscal year amid the impact from the coronavirus. This was the first annual loss in 16 fiscal years. Before the pandemic hit, Bonal issued a dividend, the twenty-third dividend in the last fifteen fiscal years.
Read More...

November 21, 2019
Royal Oak, Michigan, November 21, 2019 – Bonal International, Inc. (OTC: BONL) has announced a dividend of $0.05 per share. This dividend marks the twenty-third time Bonal has issued dividends over the last fifteen fiscal years. The dividend is payable on December 20, 2019 to the shareholders of record as of the close of business on December 6, 2019.
Read More... 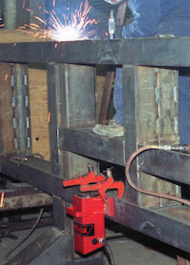 Good (weld) Vibrations
How Vibratory Weld Conditioning
Mitigates Distortion
With weld conditioning the welder might be able to weld consistently from one end of the part to the other-no flipping,…
Read More
855-921-1017